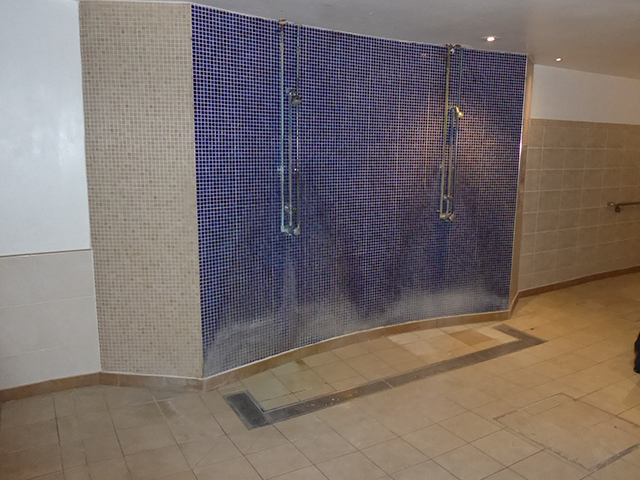 Building leaks can occur at any time, in any building. Much of our work is associated with flat roofs and external facades to commercial buildings, but we are also able to trace leaks from different sources too.  Recently we were appointed by our client, a large property management company, to investigate a leak in a sports centre in East Kent. This was a typical leisure facility with a gym, swimming pool, sauna, steam room and all the plant associated with the function of the centre.

The sports centre was located on the first floor of the building and leaks had been experienced into the units below for some time before our appointment to undertake our Building Leak Detection Service.  The first phase of the inspection was to gain an understating of the centre layout including locations of each facility and associated plant. Reference was also made to as-built drawings to confirm position of concealed pipework or voids in the structure.

A detailed moisture profile of the floor was undertaken to map variations in levels of damp. This provided invaluable information regarding the most likely position of the leak, so further investigations could be more accurately targeted.  Detailed inspections were made of pipework to plant rooms with drips being located at some joints, these were a contributing factor to some of the damp.

Later, following localised tests, the main source of the leak was established as being associated with the swimming pool showers. Such items can contribute significantly to internal leaks once failure has occurred, particular in buildings such as sports centres where the facilities can be used continually during operational hours.  All issues found were detailed in a comprehensive report and later addressed by an approved contractor.  Over the years we have undertaken numerous investigations into leaks at sports centres, so have built up a detailed knowledge of common issues in this type of facility.

If you are experiencing similar leaks, we would be happy to discuss your particular situation with you. Please all our team on 01342 410508 for more information.